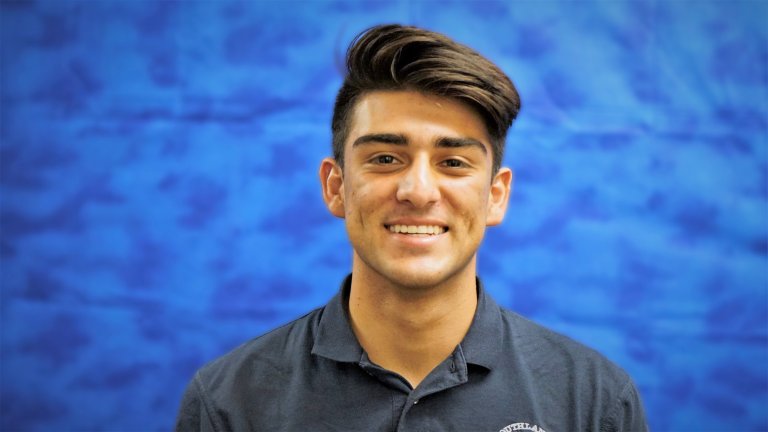 Southlands would like to highlight a student that lets his actions speak for himself. This week, we would like to introduce senior, Sage Vargas. Sage found the Southlands family through a close family friend.

After engulfing himself in the culture of SCS, Sage pointed out that the people who make up the school are the factors that make this institution so unique. He appreciates that our teachers welcome and encourage questions in class, which is something that helps all kids grow. According to Sage, his teachers go the extra mile and genuinely ask how his day is going, which coincides with our school’s passion.

Aside from being an amazing academic student, he also takes up Football, Track and Surfing as extracurricular activities both on and off-campus.

Looking back at the memories he’s made here at school, one of his favorite ones would have to be when his junior class played dodgeball during the spirit week competition and won! He is a young man of few words, but a lot of action, and we see it in the number of things he participates in.

Sage is an all-around good guy, but what makes him so unique is the relationship he has with Jesus Christ. He grew up in the church, but never really took his faith seriously until 5 years ago when his Grandfather passed away. Losing his Grandfather was devastating for Sage, but he did what he always heard people say around him, which was to pursue God.

He began to seek God out of his own desire, and the transformation that took place was amazing. His hobbies, and the way he carried himself changed. His love for people and serving God began to shine in his actions alone.

He began to not only live out his faith at home, but in new territory through mission trips. He admitted to feeling awkward at times when sharing about his faith, but he also knew that moments like those would build him up.

The one piece of advice that Sage would give to all students is to join as many activities and sports that you can, so that there is no regret after graduating.